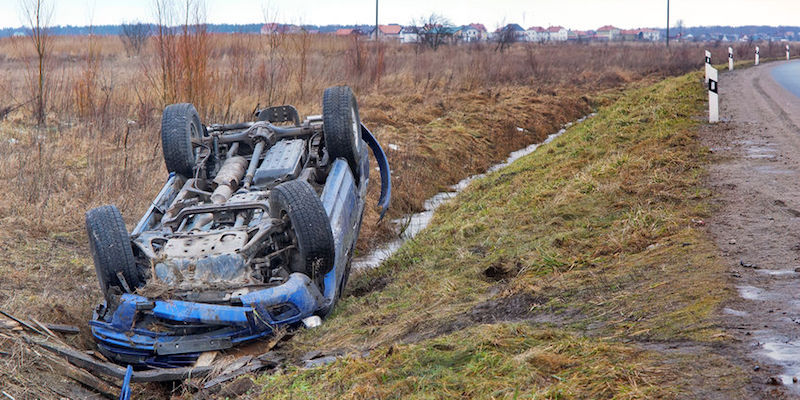 Rollover accidents are an uncommon kind of traffic accident, but among the deadliest — especially when drivers and passengers are not wearing a seat belt.

Speeding and impaired driving are the two most common reasons for rollover accidents.

According to the Colorado Department of Transportation, there are 43 vehicle accidents in our state every day. Most of the nearly 16,000 accidents that occur each year in the state are minor. But some, including many rollover crashes, are deadly.

One of the several rollover accidents in Colorado this year included an accident involving a school bus. Six students were injured but were expected to recover, and there were no deaths. The relative mildness of this accident is exceptional, however. According to the National Highway Traffic Safety Administration (NHTSA), rollover crashes are often deadly.

There are two basic types of rollovers: tripped rollovers, which occur when a vehicle leaves the roadway and then flips over when the tires hit soft ground or when the vehicle strikes something like a guardrail that causes it to flip; and un-tripped rollovers, which occur because the vehicle is top-heavy, as when the weight of a pickup’s unevenly distributed cargo causes it to flip after making a sudden movement. Researchers believe that less than 5% of rollovers fall into the un-tripped category.

Most rollovers involve only one vehicle, the one that crashes, leading investigators to believe that rollovers tend to be due to the conduct of the driver. The two most common reasons that a vehicle flips are related to speeding and impaired driving: the driver makes a sudden move that causes the vehicle to flip over.

Safer America found that in 2016, nearly 18% of all fatal vehicle accidents were rollover crashes. In a rollover situation, wearing a seat belt could be the difference between life and death. Simulated rollovers make the point vividly. Minnesota safety officials posted a video showing what happens during a rollover when the driver is wearing a seat belt and what happens when he is not wearing one. Let’s just say that the test dummy is better off with a seat belt.

Many new vehicles are now equipped with technology that helps a driver maintain control of the car, even when making a sudden or extreme maneuver. Electronic stability control, or ESC, uses speed sensors on the wheels of the vehicle to detect when the vehicle is pointed in the wrong direction.

For example, if the car starts sliding across the road or starts going in a direction different from that of the steering wheel, the ESC system can briefly apply brakes independently to each wheel. This makes the vehicle more stable so that the driver doesn’t overcorrect, reducing the chances of a rollover. NHTSA estimates that in 2015 alone, electronic stability control saved 1,949 lives.

You can’t prevent every accident on the road. But buckling up, abiding by the speed limit, and never driving under the influence of alcohol or drugs will go a long way toward keeping yourself and other persons in your vehicle as safe as possible.

If you or a loved one has been injured in an accident, contact Dan Rosen at (303) 454-8000 or (800) ROSEN-911 to schedule your free initial consultation with an experienced personal injury attorney today.