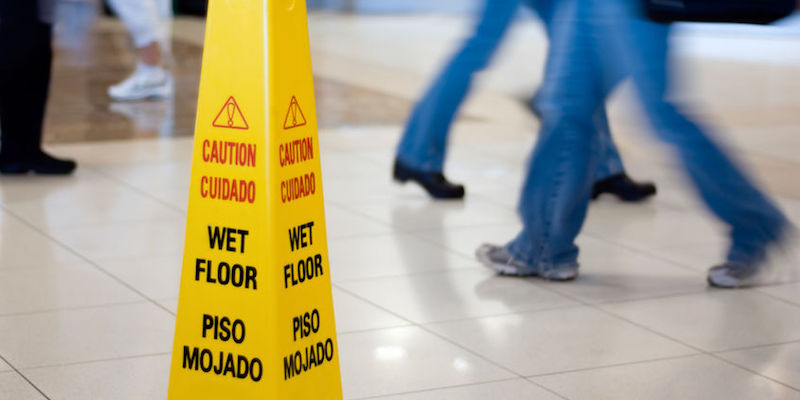 According to the U.S. Centers for Disease Control and Prevention, more than 95 percent of all broken hips are sustained in slip-and-fall accidents. And, each year, nearly 300,000 older people in the U.S. are hospitalized for hip fractures.

From Fractures to TBI, Discover What Personal Injuries May Result

Although the cuts and scrapes resulting from a slip-and-fall accident can look very serious, they are often not. Some injuries resulting from a slip-and-fall include abrasions to the legs, arms, elbows, knees, hips, and head. While some cuts and scrapes might need only minor treatment and light stitches, others could require more invasive procedures, such as surgery.

Painful fractures suffered in slip-and-fall accidents require a prompt visit to an emergency room for a diagnostic X-ray since the extensive swelling that typically occurs over the first 12 hours after a fracture can make the injury much more difficult to treat.

Often hard to prove in court, soft tissue injuries sustained in a slip-and-fall accident can also take days or even weeks to appear after the initial injury. These types of injuries can range from minor ankle and wrist sprains to serious tears of the tendons and ligaments. Soft tissue injuries often produce chronic pain and make the person susceptible to subsequent injuries.

During a fall, the affected person often takes an unusual or uneven step or flings their arms out to try and break their fall. Unfortunately, these maneuvers sometimes produce injuries of their own, such as sprains or strains of the wrists or ankles. Because sprains and strains involve the ligaments, which don’t receive a lot of blood, these injuries can take an extended period of time to heal, seriously impacting mobility.

According to the U.S. Centers for Disease Control and Prevention, more than 95 percent of all broken hips are sustained in falls. Hip fractures usually require surgery (sometimes involving an artificial hip implant) followed by hospitalization and extensive rehabilitation. Each year, nearly 300,000 elderly people in the U.S. are hospitalized for hip fractures.

Any head injury, even a seemingly minor one, warrants a visit to an emergency room since head injuries cannot be diagnosed based upon symptoms alone; some major head injuries produce minimal symptoms at the onset. While minor concussions often resolve on their own, more serious traumatic brain injuries (TBIs) can be permanent and negatively impact someone’s ability to function.

Slip-and-falls frequently result in a brachial plexus injury, more commonly known as a shoulder dislocation. A shoulder dislocation is an extremely painful injury that usually requires surgery, followed by rounds of physical therapy to restore function to both the shoulder and joint.

When the spinal cord is compressed or severed, the resulting injuries can be life-threatening and demand immediate and ongoing medical treatment. Spinal cord injuries such as quadriplegia (full paralysis) or paraplegia (paralysis of the lower limbs) are often lifelong in duration and extremely costly to treat.

If you sustained serious injuries in a slip-and-fall accident in Colorado and need to discuss your legal options, Colorado personal injury attorney Daniel R. Rosen to set up your free initial consultation today.