Will Recreational Pot Cause Traffic Accidents in Colorado? 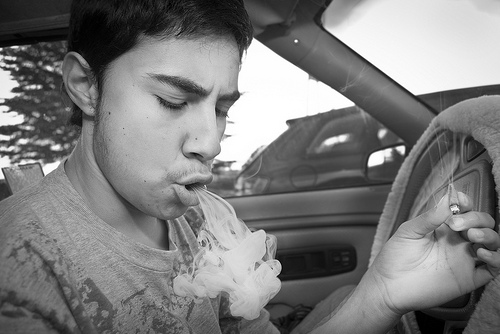 With recreational use of marijuana becoming legal on Wednesday, January 1, some are concerned that the risk of traffic accidents could increase as more people are driving while stoned. As columnist Linda Chavez, a Boulder, Colorado resident, writes for Creators Syndicate in a column appearing in The Columbus Dispatch: “Will drivers have to worry as much about stoned septuagenarians driving too slow as about teenagers driving too fast?”

And in an Associated Press article appearing in the Aurora Sentinel, Kristen Wyatt writes:

There are public health and law enforcement concerns, including whether wide availability of a drug with a generations-old stigma of ruining lives will lead to more underage drug use, more cases of driving while high and more crime.

As Chavez notes, Colorado issued 136 licenses for recreational pot retailers, mostly in Denver. Of those, only a few dozen shops across the state are expected to be selling recreational pot on New Year’s Day, Wyatt writes.

Officials in the state and in Washington State (where recreational marijuana will be legal in mid-2014) plus policymakers and governments across the U.S. and around the world will be watching what happens in Colorado, writes Wyatt. And the U.S. Department of Justice, will also be watching, she adds. The DOJ said in August that it would not sue as long as Colorado and Washington met an eight-point standard, including keeping marijuana away from other states, children, criminals and federal property, Wyatt writes.

On the other side of the issue, many pot advocates are unhappy with Colorado’s marijuana DUI law, which was adopted last spring, Erin Fuchs writes for Business Insider, in an article appearing on Slate.com. The law says “you are too high to drive if you have five nanograms or more of THC per milliliter of blood, even though many experts say there is insufficient evidence to tie that level of THC to impaired driving,” Fuchs writes. The federal government has said there is a lack of evidence that connects a certain level of THC with a certain degree of impairment, Fuchs writes, as some people may drive “perfectly well” at a certain level of THC intoxication, whereas others might not.

‘We know that when people smoke marijuana they lose some of their peripheral vision,’ Dr. Marilyn Huestis, a senior investigator at the National Institute on Drug Abuse’s Intramural Research Program, told Popular Science. ‘We know it affects the passage of time, or the idea of how rapidly time is passing. It affects balance. And one of the most interesting areas it affects is the prefrontal cortex.’That, in turn, can affect our ability to make decisions, Huestis told Popular Science’s Clay Dillow. Marijuana can also make it hard to multitask. In several studies, marijuana has also interfered with drivers’ ability to hold the vehicle in the middle of the traffic lane, Dillow reported.

In a related news item, TMZ is reporting that former college football star Marcus Vick (the younger brother of Michael Vick) was booked in Georgia at 4:20 a.m. Monday morning for driving while high on marijuana. Police noticed the presence of marijuana when they stopped him at around 2:30 a.m. for driving with expired license plates. Marcus Vick is “no stranger to trouble,” TMJ writes, in what was a developing TMZ story at this blog’s deadline. Vick was booted from the Virginia Tech football team in 2006, after a series of arrests and convictions, and has been involved in various legal issues since, including gun charges, TMZ writes.