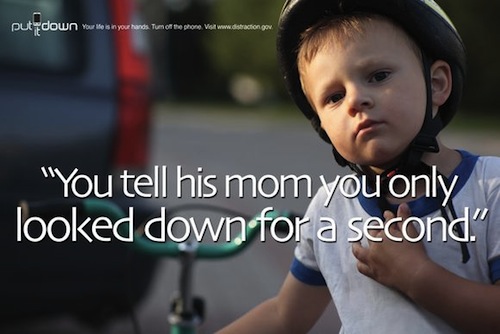 Two articles published on Monday draw attention to the distracted driving risks that apps can create. In a Governing essay entitled “Do Transportation Apps Compromise Safety?” Ryan Holeywell discusses the risks apps present for drivers. And in an article for PC World, Zach Miners reports that the parents of a girl struck and killed by a car are suing the driver’s employer because the driver was using a company driving app at the time.

Holeywell writes about his own experiences with the app Waze (which he calls “the hot new traffic navigation app that’s generated lots of buzz and lots of money”), saying that although the app is very useful, it is also “incredibly dangerous.” In his first time using Waze, he was a passenger, and Waze told him how far traffic jams extended, alternate routes and the speed of drivers ahead. The app also lets people submit their own reports and photos of traffic and road hazards, he writes.

Google acquired Waze last year, reportedly for $1.1 billion, Holeywell notes. And although at first Waze seems like other GPS navigation systems, he says it is more helpful because it collects information in real-time, while encouraging users (via a game-like “points” system) to share road information. He quotes Di-Ann Eisnor, a Waze vice president, as saying at a Transportation Research Board conference that the company’s goal is to save everyone 10 minutes per day.

Safety advocates like Jonathan Adkins, deputy executive director of the Governor’s Highway Safety Association, and former Transportation Secretary Ray LaHood have been urging drivers not to use their cellphones while driving, Holeywell writes, adding:

It’s a clear instruction, and yet, it’s the exact opposite of what Waze wants drivers to do. If every motorist followed LaHood’s advice, Waze would be out of business.

Waze’s terms of service [say] ‘it is strictly forbidden to send traffic updates … while driving. Such updates may only be sent after you have stopped your vehicle in an appropriate location permitted by law.’ But, frankly, that seems like it may be lip service to the idea of safety. After all, it’s hard to imagine any drivers will achieve Waze’s goal of saving 10 minutes a day if they pull over every time they want to report an accident. Moreover, the app prevents text inputs when the car is moving, but to override it, drivers just have to indicate they’re a passenger.…Meanwhile, one wonders if Waze users could one day find themselves afoul of the law as states continue to crack down on distracted driving. Indeed, many states have laws against texting and driving, but they generally aren’t designed to cover app use. That could be changing. Last year, under a law typically used to deter texting and driving, a California man was ticketed for looking at a map on his cellphone while behind the wheel. Two courts sided with the cops.

In the PC World article, Miners writes that Ang Jiang Liu and Huan Kuang are seeking unspecified damages resulting from the death of their 6-year-old daughter, Sofia Liu, who was struck and killed last month by a driver working for Uber. (Sofia’s brother, Anthony, was hit and injured in the same car accident and is named as a plaintiff.) The lawsuit, Miners writes, alleges that Uber is in violation of California’s hands-free cellphone laws because drivers have to use the Uber app to monitor and accept ride requests from users. Uber is a San Francisco-based company whose mobile app connects passengers with ridesharing services and drivers for hire, according to Wikipedia.

Uber, the suit said, was negligent in the development and implementation of its software…. The software as designed would lead drivers, including [driver Syed] Muzzaraf, to be distracted or inattentive while driving, it said. Muzzaraf was not adequately trained by Uber either, the suit said.

Although Uber declined to comment on the case, Miners pointed to an earlier statement saying the incident did not involve a vehicle or driver making a trip while using Uber’s system. However, Muzzaraf’s lawyer, Graham Archer, said his client was working for Uber at the time of the accident, Miners writes.