Tesla Has 8 Superchargers in Colorado Springs 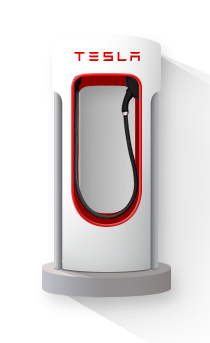 Colorado Springs now has eight Tesla superchargers, Rich Laden recently wrote for The Gazette. The “ultrafast electric vehicle chargers” make it possible for a Tesla to go more than 270 miles on a single hour-long charge. The chargers, which were installed at Tesla’s expense, are part of the company’s network of more than 250 supercharger stations throughout North America. Each has four to 12 stand-alone superchargers, which resemble old-fashioned gasoline pumps.

Although the chargers are free to use (24/7, according to Tesla), they only work with Tesla cars. To use them, Tesla vehicle owners pay $1 to park for one hour in the Cascade Parking Garage at the corner of Bijou Street and Cascade Avenue, where the chargers are located, Steve Hanley wrote for Gas2.

When the Tesla owner drives his or her car out of the garage, Colorado Springs returns the $1, which is reimbursed by Tesla. However, if the person leaves their car in the parking space for more than the hour, normal parking rates will apply.

“[…] Tesla is deliberately positioning its SuperChargers where people can visit shops or restaurants while their car fills up on electrons,” Hanley wrote. The new location will help Tesla owners travel Interstate 25 from one end of Colorado to the other.

Hanley writes that Tesla is changing the nature of road travel. Most long-distance drivers time their stops so that bathroom breaks and fueling breaks coincide, in order to get back on the road quickly. But by locating superchargers in or near towns, Tesla is encouraging travelers to slow down. Hanley called it “the interstate version of the ‘slow food’ movement.”

Shop While You Charge

Most of Tesla’s new charging stations are located in places where drivers and their passengers can dine or shop while their car is charging. Hanley said merchants love it because, “Tesla owners are highly prized by merchants and restaurateurs for their upscale tastes and larger than normal wallets.”

The location of the Bijou and Cascade parking garage makes it easy to walk to downtown restaurants and stores. It also is located just a few blocks from an exit off Interstate 25. Tesla has a five-year contract with Colorado Springs to have their superchargers in that garage, said Greg Warnke, Colorado Springs’ parking administrator. He said:

We’re pretty excited about it. I think it’s going to draw some additional notoriety to downtown Colorado Springs. The Tesla group themselves are pretty well connected across the United States. 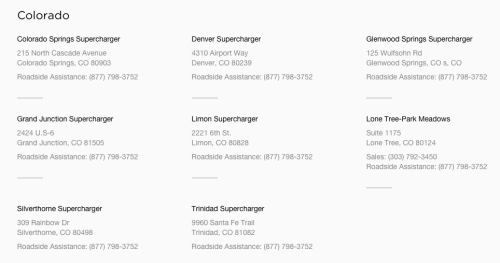